Readers of this blog may sometimes not take the scientific merit of this site very seriously. Even so the site attempts to provide some up to date research on wisdom teeth (also known as third molars), dentistry, and other topics in medicine. In the past years several pages of this site including http://www.teethremoval.com/complications.html and http://www.teethremoval.com/dental_deaths.html have been cited in scientific article publications and posters. I wanted to draw attention to three instances of this occurring.

First, an instance of citing the complications page came in an article titled “Time to Remove Your Wisdom Teeth!?” written by Michelle G. Tran from University of California, Davis appearing in the Lent 2013 edition (vol. 18, University of Cambridge) of the Science in Society Review by the Triple Helix, pages 20 to 21. See http://camtriplehelix.com/archive/journal/issue/18.  This is the University of Cambridge site but it appears there are 18 universites that participate worldwide and the articles can appear at other university chapters.  According to the website

“The Triple Helix is an international student organisation composed of independent chapters in many universities worldwide. It was established as a productive space to discuss and explore the interdisciplinary issues surrounding science, its ethics, applications, threats and potential… The Triple Helix began with its termly journal ‘Science in Society Review’…We publish the journal every term and distribute all 3,000 copies around the colleges and departments of the University. Our authors and editors are undergraduate and graduate students at the University who work closely together…A special feature of our articles is that they are all reviewed for accuracy by senior academics in the relevant fields.”

“And so, it is as if the community of researchers, doctors, and patients are sequestered on their own islands with differing viewpoints on the same issue. Thus, information concerning third molar extractions is not necessarily available to everyone. Information from researchers is usually found exclusively in specialized journals, of which the general public does not frequent.”

The article also goes into some studies conducted by the American Association of Oral and Maxillofacial Surgeons (AAOMS). The author feels the stance AAOMS takes on wisdom teeth removal is ambiguous because they pooled together studies that showed the presence of impacted wisdom teeth negatively affects the periodontium, or supportive tissues, of adjacent second molars; however, in the same paper they found that removing wisdom teeth was harmful to the periodontium. The author also speculates that money could be a reason for dentists and oral surgeons to suggest extraction of wisdom teeth. The article concludes by suggesting better communication between doctors and patients can help and it is important to understand the truth behind information provided. Below I have provided an excerpt from the article showing the citation to this website. 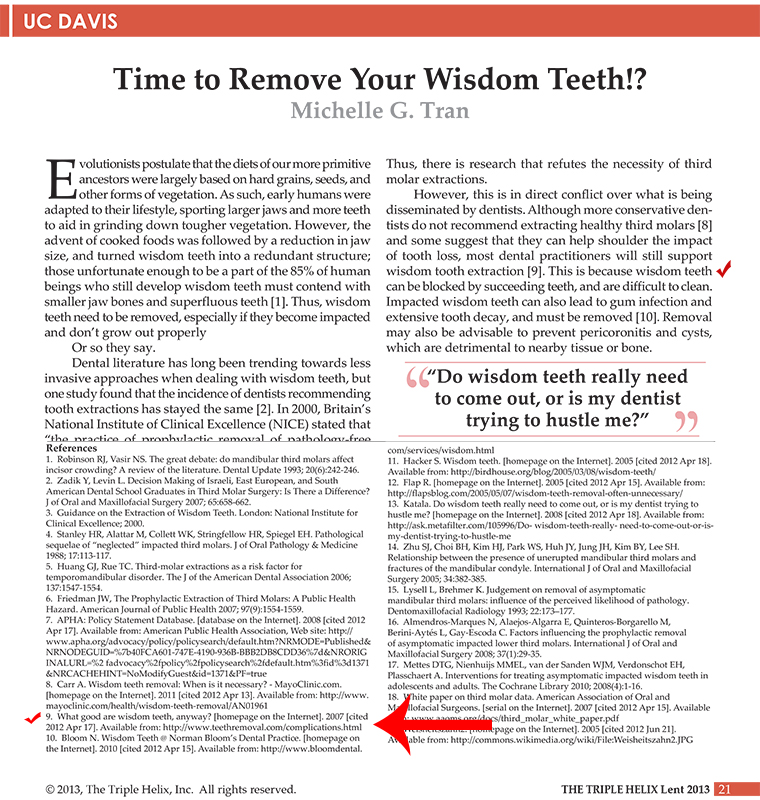 Second, an instance of the dental death page of this site being cited came in a poster presentation at the International Assembly for Pediatric Anesthesia, in October, 2012, at he Marriott Wardman Park Hotel in Washington DC. The poster was titled “A Pediatric Airway Curriculum for Pediatric Dental and Oral Maxillofacial Residents” by Vincent C. Hsieh, Douglas R. Thompson, Agnes I. Hunyady, Shilpa T. Verma, and Michael J. Richards from the University of Washington and Seattle Children’s Hospital. See http://www2.pedsanesthesia.org/meetings/2012ia/posters/. The article discusses the creation of an advanced airway management curriculum for dental and oral maxillofacial surgery (OMFS) residents to improve patient safety in pediatric dental sedation. The poster describes a comprehensive two-week airway management course that was developed that includes a small group discussion and hands on airway training.  Below I have provided an excerpt from the poster showing the citation to this website. 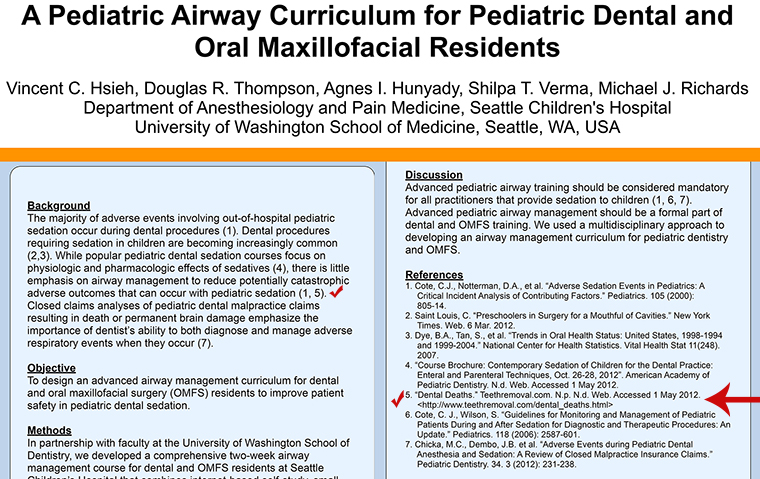 Third, another instance of the dental death page of this site being cited came in an article titled “Death in dental clinic: Indian scenario” in the Journal of Forensic Dental Sciences written by Kedarnath Nakkalahalli Seshappa and Shruthi Rangaswamy (vol. 8, iss. 2, pp. 61-68, May-Aug. 2016). The article discusses deaths occurring during dental treatment and how to prevent such incidents from occurring. The article also goes into medico-legal aspects of what a dentist should do if a death does in fact occur. The article says that a dentist may want to inform the police about what happened. The dentist may be liable though if the conduct fell below that of the standards of a reasonable competent practitioner in the field. The article discuss the Bolam Test in regards to determine if a doctor should or should not be arrested. The article also goes into other legal aspects one may need to deal with such as the state dental council, attorneys on behalf of the patients family, and the news media. The article also goes into medical negligence and says

“Medical negligence may be defined as a breach of the physician’s duty to behave reasonably and prudently under the circumstances that cause foreseeable harm to a patient.”

The article says that negligence can occur with such things as an incorrect dosage of drugs, an injury during administration of an injection such as the wrong drug being given or the wrong method, and a failure to provide life-saving medical care. The article also goes into criminal negligence and says

“In order to hold a practitioner criminally responsible for the death of a patient, it must be established that his negligence or incompetence was such that it showed utter disregard for the life and safety of others in a manner that amounts to a crime against the state.”

The article goes on to to conclude by saying

“From the olden times in India, doctors have been likened to gods…Doctors even now command great respect in the Indian society…At the same time, there have been various instances of public abusing the doctors physically upon untoward incidents happening to the patient…In the present times, all the treating doctors, dentists particularly, because of the general perception and the high cost involved in dental treatment, have to be extra careful in preventing any serious injury to the patient and be well aware of the professional negligence and its consequences.”

Below I have provided an excerpt from the article showing the citation to this website. 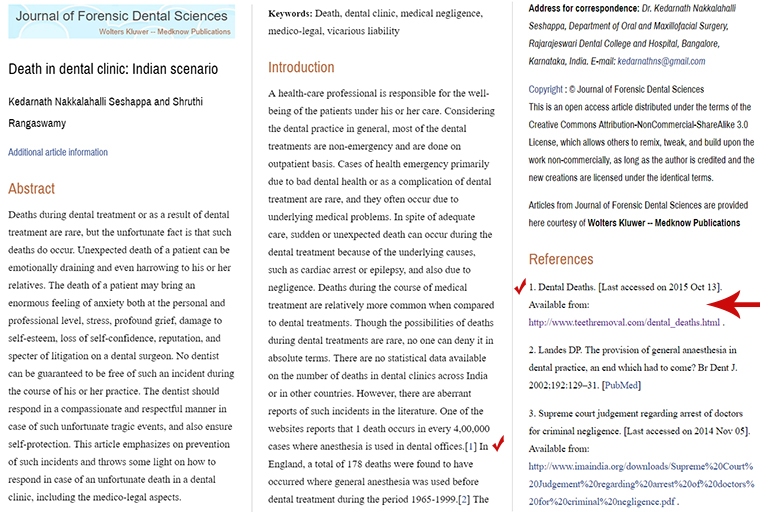 It is nice to see other researchers and practitioners in the dental community finding some value in the content provided on this website and citing pages in their articles and posters.