Just a quick update to remind you that the Multidisciplinary Conference on Third Molars (Wisdom Teeth) will be occurring today October 19, 2010, at the Willard Intercontinental Hotel in Washington, D.C. at 11 A.M Eastern. To find out more details please refer to my previous blog post http://blog.teethremoval.com/multidisciplinary-conference-on-third-molars-wisdom-teeth/.

If you are unable to make the conference and would like to listen in online, a live audio stream will be provided. Simply visit http://www.visualwebcaster.com/event.asp?id=73177

This conference is being put on by American Association of Oral and Maxillofacial Surgeons (AAOMS) and Ira. D Cheifetz, the immediate past president of AAOMS, will be in attendance. 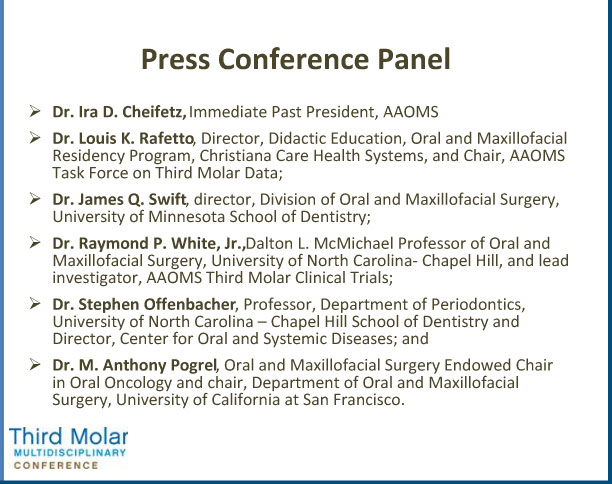 Update: I did get a chance to listen in on the conference which lasted just over an hour. The live stream also showed a PowerPoint presentation to accompany the speakers. The speakers who presented are seen in the above slide on the panel.  If you are interested in learning more about this panel who consisted of Dr. Ira D. Cheifetz, Dr. Louis K. Rafetto, Dr. James Q. Swift, Dr. Raymond P. White, Jr., Dr. Stephen Offenbacher, and Dr. M. Anthony Pogrel you can visit http://www.aaoms.org/docs/media/third_molars/press_conference_biographies.pdf. Each member of the panel did have their own slides which they presented although I don’t think  Dr. Ira D. Cheifetz explicitly had his own slides.

AAOMS has released some additional documents to accompany this Third Molar Multidisciplinary Conference which include a Press Release, an Executive Summary, and some Graphics. You can find these documents at http://www.aaoms.org/third_molar_news.php. I am not sure if any of the  PowerPoint Presentations will be made available in case you are interested in viewing but I did capture the majority of them while watching the conference online. Hence I will summarize below.

Dr. Louis K. Rafetto discussed briefly in his presentation about how pathology precedes symptoms so decision making should be based on the likely development of pathology and not on the presence of symptoms.

Dr. James Q. Swift discussed how diseases such as periodontal (gum) disease around wisdom teeth is often without symptoms and thus not noticed. He further addressed how wisdom teeth are difficult to reach and often have cavities or are affected with gum disease.

Dr. Raymond P. White, Jr. discussed some of the problems that can occur if someone keeps wisdom teeth such as periodontal inflammatory disease and the associated pathology. He discussed how microorganisms evade neutrophils and become colonized leading to migration by monocytes and lymphocytes which leads to an increase in inflammatory mediators which can then lead to enzymes that destroy collagen and bone.

Dr. Stephen Offenbacher  discussed the local and systemic implications of third molar retenion. A young pregnant female study was discussed which showed that the presence of wisdom teeth is associated with worse periodontal status, increases the risk of systemic exposure of oral bacteria, and is associated with systemic inflammation.

Discussion of the oral-systemic pathway was addressed:

Thus, this particular presentation by Dr. Offenbacher suggested that wisdom teeth represent a potential systemic source of infectious dissemination and systemic inflammation. Certain biochemical markers such as serum IL-6 and CRP  have increased levels with third molar pocketing and that this can cause more severe chronic systemic diseases which include atherosclerosis, cardiovascular disease, and poor glycemic control. Hence the argument is made that removing wisdom teeth decreases the risk of developing periodontal pocketing which thus can subsequently disease the risk of developing chronic systemic diseases.

There was also a question and answer section at the end of where the presenters answered questions from both the live audience and also online questions from people listening in.

The above simply serves as a summary of what occurred at the Third Molar Multidisciplinary Conference but does not cover or articulate everything addressed.

Although I am not sure if this was really the intent, but it seemed that the message from the conference was that wisdom teeth should be actively managed and watched and even if someone has no symptoms a disease could still be present. This does not necessary mean all wisdom teeth need to be removed but oral surgeons are less likely to want to remove wisdom teeth for a patient who is in older age.

There is agreement that additional studies on wisdom teeth and analysis of data already available should be undertaken to better understand if asymptomatic wisdom teeth should or should not be routinely removed. There is consensus agreement that wisdom teeth causing problems should be removed. I make the argument in addition to other arguments highlighted on my website, that since it is not clear whether or not to extract symptom free wisdom teeth but it is clear that life altering complications can and do occur from their removal, that at this time the routine removal of asymptomatic wisdom teeth should be discontinued and stopped. In addition the conference did not go into many details on the complications that can occur after wisdom teeth removal and stated that around 10% of people have some complication.  Furthermore, this conference was put on by oral surgeons who make  a large portion of their living by removing wisdom teeth so it is of course skewed in regard to scientific fact.