So wisdom teeth are also known as third molars but did you know that there are also fourth molars in a small subset of patients?

A recent study was performed by the United States at an Air Base in Japan which is currently in press to appear in the Journal of Oral and Maxillofacial Surgery titeld Prevalence and Management of Fourth Molars: A Retrospective Study and Literature Review by Khurram M. Shahzad and Lawrence E. Roth, 2011.

The prevalence in this study of fourth molars was 2.2% and this is similar to the prevalence found from a few other studies were it was between 1% and 2%.

“The presence of fourth molars as well as the risks and benefits of extraction versus observation should be discussed with the patients and an individualized treatment plan should be fabricated.”

The authors comment that fhe fourth molars have a possibility of being displaced in the infratemporal fossa or the maxillary sinus during surgery and note that this is more likely to occur if the bone distal to the fourth molars is thin. (Note these are known complications of wisdom teeth removal as discussed on the complications page http://www.teethremoval.com/complications.html)

The authors of course recommend that each patient should have a panoramic x-ray and/or computerized tomography performed.

The authors also say it is even possible to remove a third molar (wisdom tooth) and leave the fourth molar in place which may allow the fourth molar to migrate down and after some time (a few years) a safer extraction can be performed.

Of course the risks of leaving a fourth molar are similar as leaving a third molar (wisdom tooth) for observation http://www.teethremoval.com/risks_of_keeping_wisdom_teeth.html

Below I have added the 2 panoramic radiographs that are in the journal article and I have added some labels for the fourth molars. 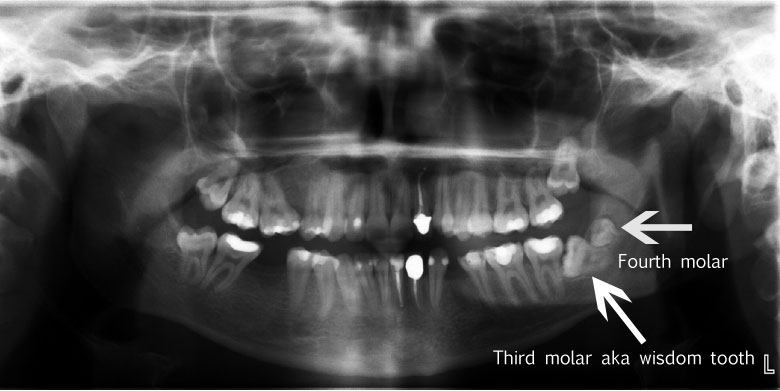 17 thoughts on “What to Do about the Fourth Molar: Similar Management Strategies as the Third Molar aka Wisdom Tooth?”