Recently an article has appeared on DrBicupsid.com titled Swimming in acidic pool nearly destroys man’s teeth written by Rob Goszkowski and posted on September 6, 2011, located at http://www.drbicuspid.com/index.aspx?sec=sup&sub=rst&pag=dis&ItemID=308363
The article describes a case of a 52 year old man who nearly lost the enamel of his teeth in just 5 month by swimming regularly at his home pool.

In fact, while it is widely appreciated that exercising regularly is good for your health you should consider the potential harm of any sort of new exercise program and yes this includes swimming and even walking.

This man was suffering from hemangiomas in his liver and was told by his doctor to stop jogging so he decided on his own that he would take up swimming and in fact would do so for 90 minutes a day at a pool in his house that was not being professionally maintained.

It was found that the reason for his rapid enamle erosion was due to having a highly acidic chlorinated swimming pool (low pH). The normal pH of a pool should be between 7.2 and 7.6 which is considered to be basic. 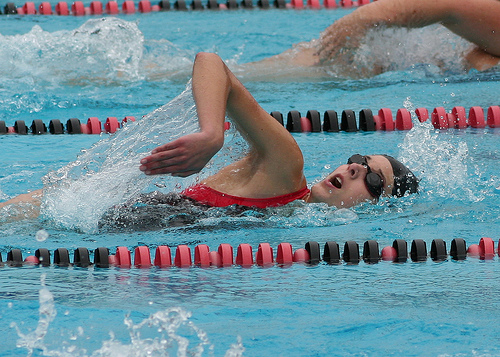 Image from http://www.flickr.com/photos/gcwest/136945653/ and has a Creative Commons License.

Tom over at OralAnswers.com has also explored swimming and it’s effect on teeth in his article titled Can Chlorine in Swimming Pools Dissolve or Stain Your Teeth? published June 15, 2011, and located at http://www.oralanswers.com/2011/06/chlorine-swimming-pools-dissolve-stain-teeth/

In his article he states:

“This means that in a basic swimming pool, the calcium and minerals present in your mouth will harden onto your teeth rather than dissolve (as they would if the pH were acidic – this is why your teeth dissolve slowly when you eat or drink anything acidic.) “

“Athlete swimmers, who often swim laps more than six hours a week, expose their teeth to large amounts of chemically treated water. Pool water contains chemical additives like antimicrobials, which give the water a higher pH than saliva, causing salivary proteins to break down quickly and form organic deposits on swimmer’s teeth. The result is swimmer’s calculus, hard, brown tartar deposits that appear predominantly on the front teeth.”

This is not the first case where dental erosion has occurred due to a low pH in a swimming pool due to inadequate maintenance. This is described in an article called Etiology of dental erosion–extrinsic factors by DT Zero appearing in Eur J Oral Sci, vol 104, no. 2 part 2, pages 162-177,  April 1996.

Hence it is important to know what the pH is of the pool you are swimming in and especially so if you begin to notice some dental erosion.